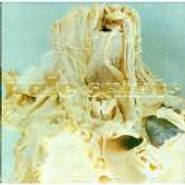 In Ribbons was the second album released by Pale Saints. The Comforts Of Madness was released in 1990. In Ribbons was my introduction to the band. Meriel Barham had been the original vocalist for Lush. But joined Pale Saints before they recorded this album. This is another one of those perfect shoegaze albums. I can listen to this album over and over again. And I have. The album has some dark undertones to it. It sort of gets beneath my skin and gets me a bit gloomy. But I do love this album. And it features one of those classic Vaughan Oliver 4AD covers. I actually always really loved this album cover and always thought it was just melted candles. Or a melted wedding cake. It was years before I realized that this was actually bleached entrails. It really made me look at the album cover a whole new way. Sort of beautiful and disgusting at the same time. The album features some really fantastic songs. "Blue Flower," "Hunted," "Liquid," "Featherframe," and "Throwing Back The Apple." The album is not exactly full of hits and Pale Saints never got as popular as Lush. But this album is on most shoegazers list of favorite albums of the era. Pale Saints went on to put out only one more album after this. Slow Buildings was released in 1994.