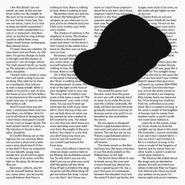 Since shedding his Final Fantasy moniker, orchestral singer/songwriter Owen Pallett's music has grown increasingly personal and affecting. His 2010 album Heartland used his own name for the first time and nicely balanced Pallett's emotive tenor with arch instrumentation, something that continues toward the emotional on In Conflict. Pallett's somewhat operatic vocals are tempered by fidgety, atonal violins and a sudden electronic breakdown in "I Am Not Afraid." He indulges in some classy synth-pop on the title track, confirming our suspicions that Pallett has always been capable of producing straight-faced pop underneath the artiness. Still, Pallett has loftier goals than merely using his compositional skills in service of hummable pop tunes, and his songs that are able to both capture pop and avant-garde flights of fancy end up being his best, like the remarkable, string-laden "On a Path," or synthy "Song for Five & Six." Though Pallett straddles the line of pretentiousness, like Kate Bush or Peter Gabriel before him, he's able to wrangle his wild compositional ideas into musical fantasy worlds that offer seemingly endless exploration.