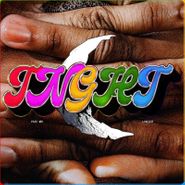 When does a decade truly begin? Chronologically speaking, easy: New Year’s Day on any given year ending in a zero. Yet, culturally, a decade often takes a year or so to establish the trends that come to define it in retrospect, and nowhere is this truer than in music. In 2010, mainstream electronica was not quite indicative of what was to come, though the dubstep craze was certainly beginning to crest. Given the decade’s nascence, one could almost point to TNGHT’s seminal 2012 debut as the moment that the sound of the 2010s fully broke through. No, the production duo consisting of Hudson Mohawke and Lunice did not invent trap-rave. But they certainly perfected it at the right time, and after a 7-year hiatus, fittingly returned to bookend the decade with their second release. II, which arrives on wax courtesy of Warp Records after premiering back in November, continues the brazen sound palette that made TNGHT so monolithic. However, aside from a straightforward banger like “Dollaz,” which most closely replicates the sound of TNGHT’s earlier singles, II finds the duo venturing into much stranger places. Picking up bits and pieces of the sound of 2010’s electronica like flotsam along the way, including PC Music’s uncanny valley pop and the cacophony of early Arca, II only seems to serve the agenda of pushing (what is theoretically) dance music into rhythms and sonic textures never dared before. Parts of the album, particularly opener “Serpent,” are so musically bonkers you’d be forgiven in thinking Sun Ra somehow got hold of an MPC and was helping Arkestrate the madness: various bells and drums clatter in patterns that take time to determine, and every time there seems to be a HUGE drop about to happen, the music pairs back with an almost uncomfortable amount of space. Suffice to say, II is not going to inspire the same capitalization that TNGHT did, as it’s hard to imagine trying to rip off of one of these songs to try and sell Mountain Dew. Yet great artists often find their audiences playing catch-up, and TNGHT prove they’re still three steps ahead of us all.