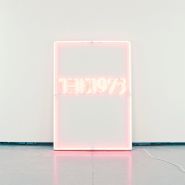 The Manchester heartthrobs have already taken over the world of pop music with their previous, self-titled album. They're hard to categorize as the vocals come right out of the world of 2016 pop, but their guitars feel like lost funk weirdness from a late-'70s Bowie album, the synths pulled right from a Michael Jackson B-side, and drums that sound like they were recorded for Factory Records. Lead singer Matthew Healy wanted to make an album about "the fundamentals of being a person... love, sex, death." Tracks like "The Sound" feel like a forgotten '80s R&B dance floor jam whose message is about crumbling love and the lingering joy even when a couple breaks apart. "UGH!" feels destined for endless club play with its minimal disco, guitars right out of the Bee Gees, and whistles that give the love song a lot more of an upbeat attitude, covering up how secretly bitter the song is. With their new album, the 1975 are cementing their reputation as creators of some of the best modern dance music to keep you moving and singing all of 2016.