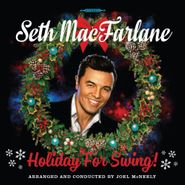 Seth MacFarlane might be known more for being the king of crass animated shows like Family Guy and American Dad, but who knew the voice of Peter Griffin had the pipes to belt out holiday classics while simultaneously invoking the energy of Fred Astaire? Sprinkled with goofy humor and arrangements right out of Arthur Freed's MGM musicals, Seth MacFarlane plays it (mostly) straight with iconic vocalists like Norah Jones and Sara Bareilles joining in to add a bit more class to the mix. A couple of martinis and Holiday for Swing!, and December will feel like June in no time.