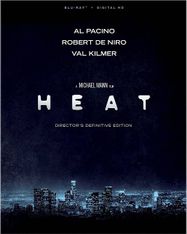 Michael Mann's Heat - one of the most powerful dramas of all time - is more incendiary than ever. This all-new 2-Disc Director's Definitive Edition features a new restoration personally supervised by Mann, plus hours of revealing extras that include new  interviews (one moderated by Christopher Nolan) of the director and cast as they reflect two decades later on the meticulous preparation and challenges that went into making the epic Los Angeles crime story.

Oscar® winners Al Pacino and Robert De Niro dually power the momentum and large scale of this groundbreaking film written and directed by four-time Oscar® nominee Michael Mann. In the wake of a precision heist of an armored truck, an obsessively detective (Pacino) begins to hunt Neil McCauley (De Niro), a ruthless professional thief, and his crew through the streets of Los Angeles. As the stakes escalate, their lives begin to mirror and unravel, and McCauley's the crew initiates its most dangerous and complex heist. Co-Starring Val Kilmer, Tom Sizemore, Ashley Judd, Amy Brenneman, Diane Venora, Natalie Portman and Jon Voight, HEAT delivers hard-hitting action, gripping suspence and stunning performances.