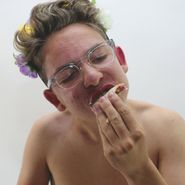 Cherry Glazerr's debut, Haxel Princess, was originally released in 2014 on Burger Records. The band recently signed to Secretly Canadian and they've repressed Haxel Princess on limited edition translucent red vinyl. The album levies great garage riffs one after another while singer/guitarist Clementine Creevy caterwauls like the second coming of Kim Deal. “I don’t wanna be seen, I don’t wanna be heard,” she cries on the terrific “White’s Not My Color This Evening” before unleashing a maniacal laugh in the background, as if being a great band leader is something she can’t even control. On the title track, the band doles out a laid-back alt groover, while Creevy’s coos go high and ethereal, swooping up and down like a super chill ghost. Wonder if NPR’s Chery Glaser rocks out to this?