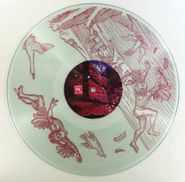 The experimental-music label Table of the Elements turned ten years old in 2003; to mark the occasion, it released a mammoth and lavish series of single-sided, silk-screened, twelve-inch LPs dubbed “The Lanthanides.” The late, great John Fahey was deep in his experimental period in the mid-90s, but on Hard Time Empty Bottle Blues, recorded live at Chicago’s Empty Bottle in 1996, he emerges to deliver a set that recalls his country-blues, finger-picking origins. It’s an outstanding collection of tracks. The packaging itself is impressive: the LP is pressed on clear vinyl with an image on the B-side, of Icarus and Daedalus; they rise to the sky and fall to the ocean as the disk spins and spins.