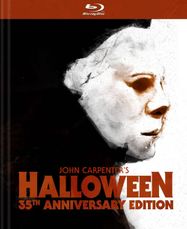 "Halloween", says Entertainment Weekly, "is was, and ever shall be the alpha and omega of boogeyman flicks." And to commemorate its 35 years as one of the greatest horror films of all time, Anchor Bay presents John Carpenter's 1978 masterpiece in this ultimate fan edition: This 35th Anniversary Blu-ray features a newly remastered HD transfer supervised by cinematographer Dean Cundey, all-new Dolby TrueHD 7.1 audio, a revealing new audio commentary reuniting director John Carpenter and star Jamie Lee Curtis, a brand-new hour-long Curtis featurette, and much more. The immortal original is back and now more terrifying than ever. This is the night Michael Myers comes home like you've never seen or heard it before!