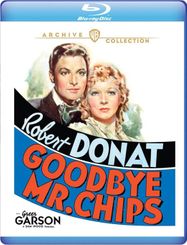 Young schoolteacher Charles Edward Chipping (Robert Donat) imposes strict discipline on his young charges at a Victorian-era English public school, becoming a fearsome presence on the campus grounds. But the love of spirited young suffragette Katherine Ellis (Greer Garson) brings the Latin instructor out of his shell and makes him a beloved campus institution into the 20th century and through the shattering violence of World War I. The film is based on the best-selling novel by James Hilton.