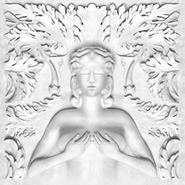 If you thought Kanye West’s label showcase would be a forum for the rapper, producer and hip-hop mogul to premiere some new production tricks, you’d be right — just listen to the insane, epic and seemingly anti-commercial sounds of the surging “Mercy,” featuring Big Sean, Pusha T and Ghostface Killah. But, like Watch the Throne, his full-album collaboration with Jay-Z, it’s also a chance to loosen up without having to fully shoulder the expectation set by his solo output (and his ego). An awesomely weird track like “Mercy” is preceded by the deceptively tossed-off sounding “Clique,” with Jay-Z and Big Sean having a little fun rapping creatively over minimalist production. “New God Flow” fulfills West’s need for at least one big religiously posturing track per album, and “Cold” sees some of West’s most aggressive rapping, including this succinctly put challenge: “If you think you could do it better than me, then you do it.” The non-Kanye songs have their appeal, as well, as on the appropriately faded sounding “Higher,” featuring The-Dream; and the fun, hard-hitting “Sin City,” featuring a pack of artists, including John Legend, singing and rapping over a big beat and sheets of synthesizer. West can’t help be the star of his own show, though, coming back in with what can only be described as a megaballad: “The One,” pairing gospel chords and Marsha Ambrosius’ warm vocal hook to a huge drumline intro and rapping from 2 Chainz, Big Sean and West, who says “Best way to describe my position is at the helm.” Thankfully, he steers Cruel Summer to shimmering waters.