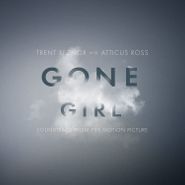 Trent Reznor and Atticus Ross’ spacious soundtrack for David Fincher’s Gone Girl produces the sensation of falling slowly with no discernable end point. The first few tracks flutter by with only hints of the sinister poking through lovely synth tapestries—a bassy cello stirs ominously below “Empty Places” while strident strings come through suddenly like an unwanted guest. “With Suspicion” raises the hair on the back of your neck with the kind of disintegrating techno-dread ending you might expect from these guys. But despite Gone Girl’s subject matter and the pedigree of its soundtrack’s creators, the Gone Girl soundtrack is often lovely, as on the lush “Just Like You” or percolating “Procedural,” over which you could picture Reznor’s voice slithering around. What Ross and Reznor have done is crafted a nuanced set of pieces that highlight absence—a lack of beats, concrete melodies and resolution—to match a film about what happens when everything you thought you knew about the person you thought you loved turned out to be wrong. As the soundtrack progresses into its second half, electronics noise seeps through the edges to mirror the film’s subject, as Ben Affleck’s Nick Dunne’s world comes apart. Even then, the work here is subtle; industrial pieces like “Secrets” and “Perpetual” are followed by more pensive ones like “Still Gone” and “A Reflection.” It’s masterful to say the least, another terrific entry into Reznor and Ross’ brilliant soundtrack work for Fincher following The Girl With the Dragon Tattoo and The Social Network.