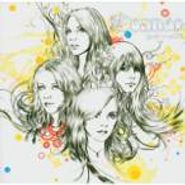 The Runaways and Suzi Quatro opened a lot of doors for female rockers in the 1970s. The Donnas no doubt owe a lot to them, but truth be told, this group of girls rock a bit harder in terms of sheer musicianship and songwriting skill, truly proving girls can rock just as hard as the boys. The follow-up to their stadium rock-esque Spend The Night has a more sophisticated feel, the lyrics are more mature (dealing for the most part with romantic issues), and musically you will even find a few acoustic tracks here, like the title track off the album. However, that said, there is no shortage of hot riffage on this release: songs like the opener “I Don’t Want To Know (If You Don't Want Me)” rock with all the gusto of a Cheap Trick song but are all the more fun coming from a female perspective. The production assures plenty of ear candy, and the girls deliver each song with pure heart and soul.