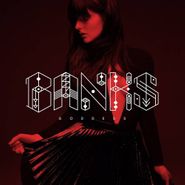 L.A. singer Banks has her work cut out for her. A somewhat enigmatic underground electronic/R&B singer who refuses to use social media (but will put her real phone number on Facebook), she’s entering a crowded field among the likes of FKA Twigs and How to Dress Well, who’ve both just put out critically adored albums. But that phone number thing should tell you something, as Jillian Banks’ ability to put herself out there vocally and emotionally on her debut album helps her stand out. Songs like “Waiting Game,” with its surging, Gary Glitter-reffing vocal hook, and “This Is What It Feels Like,” with its croaking synths, certainly sound great, but Banks’ emotional vulnerability is ultimately what sells these songs, as she clears away the clutter in “Waiting Game” to sing emotionally at the song’s climax. Lyrically, Banks comes across as honest, if not quite poetic. Some songs don’t quite jibe well with the rest of the material, like the Rihanna-ish “Brain” and freestyle-inspired “Fuck Em Only We Know.” But even those songs stand pretty strongly on their own. She can even sell a straight-up piano ballad, like “You Should Know Where I'm Coming From,” which sounds like a more pop-minded Fiona Apple. If Banks can settle on whether she makes us want to dance or feel something emotionally, there’ll be no stopping her, but Goddess is a brilliant enough start.