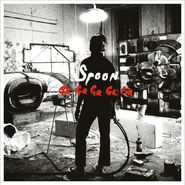 When Ga Ga Ga Ga Ga, the sixth full-length record by Spoon, was first released 10 years ago the band was fast becoming an indie-household name. While old guard Spoon fans were starting to get defensive about losing their precious secret to the masses and name checking the band's earlier works, a whole new audience was starting to convert to the stripped-down, rhythm-based grooviness of the Austin outfit. A decade later and the record has stood the test of time, becoming, perhaps, the most confidently executed document of the band's offerings. If Exile on Main St. was the culmination of The Stones' first decade of blues-rock experimentation, Ga Ga Ga Ga Ga was the decade-long distillation of Spoon's sound and attitude, while still bringing fresh perspectives to the mix. It should also be noted that when the record was first released, new vinyl was still sort of a novelty and thus the LP version never came with the bonus EP, Get Nice!, which was included in the CD package. Thankfully, with the 10th anniversary edition, that 12 track collection of demos and alternate takes, is finally available as a bonus LP.