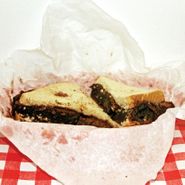 Ah, the dreaded covers album, right? As one of the most popular devices for a quick record company cash-in, most end up as little more than a passing novelty for which replay value fades quickly. Not so fast there, partner. A good three years removed from his dutiful T-Rex covers collection Ty Rex, Ty Segall has quietly become one of the best at the maligned art form, as his cover of Hot Chocolate's “Every 1’s a Winner” from January’s Freedom’s Goblin exemplifies. Segall brings life to these dusty classics by transforming them entirely, playing to his unique, scuzzy skillset as a musician. Thusly, War’s perennially overplayed “Low Rider” becomes an early-DEVO-ish sinister crawl in the hands of Ty, about as cosmetically pleasing as the grotesque sandwich that graces the cover. Funkadelic’s raucous “Hit it and Quit It” is done in a blistering fashion; a swaggering sludgefest a la early Soundgarden. The mellower fare here is flipped on its head: both Grateful Dead’s “St. Stephen” and Neil Young’s “The Loner” are turned into fuzzed-out, cosmic punk blasts that could easily pass for Segall originals if you’re not paying too much attention. Also, can we just mention that Fudge Sandwich is the SIXTH released Ty Segall project of the year? Dude is not human.