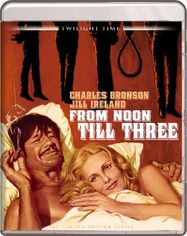 Writer-director Frank D. Gilroy (The Subject Was Roses) gives us, in From Noon Till Three (1976), an atypical Charles Bronson Western that’s also a clever meditation on myth versus reality. Bronson plays a reluctant desperado whose three-hour tryst with a lovely widow (Jill Ireland) is turned into the stuff of legend when he is mistakenly reported dead. Gorgeously shot by Lucien Ballard (The Wild Bunch), and highlighted by a superb Elmer Bernstein score, available on this Twilight Time release as an isolated track.