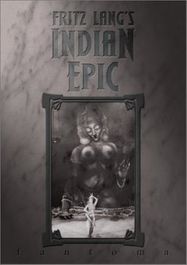 After more than two decades of exile in Hollywood, master filmmaker Fritz Lang triumphantly returned to his native Germany to direct his lavish two-part adventure tale from a story he co-authored almost forty years earlier.

In the grand tradition of the serialized cliffhanger, part two contains the adventure with a rescue from a sandstorm, a trek through a jungle, a cave of lepers, and a bloody palace rebellion. Together, these films provide the cinematic link between the classic silent serials and the modern action/adventures of Indiana Jones and The Mummy.

With incredible precision, Lang crafts a blend of color, decor, movement and montage that, in the twilight of his career, once again proves him a virtuoso of film form. Previously available in America only as Journey to the Lost City, a 90-minute condensation of the two films, Fantoma presents these exotic masterpieces restored and complete in this specially priced 2-disc boxed set.