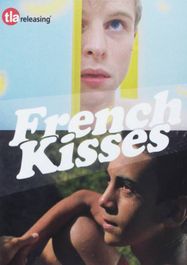 Get seduced with the best gay shorts France has to offer, in this exquisite collection of sexy shorts- French Kisses are: Apollo: Apollo is a modern teenager. Riddled with insecurities, Apollo runs towards manhood, fantasizing about an ever more muscular body, an even bigger banana. Herculaneum: Three "appointments", two men and a volcano that growls. The Body of Angels: Rémi throws himself to the ground, listens to the birds and falls asleep in the hedges. Meanwhile, Gabriel does something far more sinister. En Retour Jean-Marc receives Simon, a younger man, to dinner. After a promising start, the evening plunges in to extreme drama. Ruptures: Gabriel, a director, and André, his ex-boyfriend’s paths cross in Paris without having seen each other for 10 years. Juliet Electrique: In the heat of July, Thomas and Victor, two 14-year-old teenagers, get bored and want to escape. Victor decides to take Thomas along an abandoned bridge. The latter, fearful, follows him. There, he will have to face his most secret fears and desires.