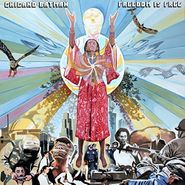 As the country stews in its volatile division, with outrage crying from all corners, the title track off Chicano Batman's new album, Freedom Is Free, is perhaps one of the few healing salves to emerge in recent months. Both lyrically and musically, the track is unpatronizing in its optimism, yet still served with a slight dose of melancholy. Much like the rest of the album, the band's Latin-influenced garage rock is fused with a heavy R&B backbone. The drums are funky, crunchy, and would almost sound sampled were they not played with such live soul. The opening track, "Passed You By," is a neo-soul gem, with guitars that bring to mind the R&B guitar stylings of Curtis Mayfield and Steve Cropper while "The Taker Story," which criticizes man's presumed right over the land and its subsequent destruction, is like a relaxed James Brown track. Songs like "La Jura" and "Angel Child" bring to mind the psychedelic pop of '60s Rio De Janeiro, and the guitar and organ get pretty far out and fun on "Friendship (Is A Small Boat In A Storm)."

This great East L.A. tropicalia-soul band really hit their stride on a compelling set of tunes that combine inspiring message and indomitable groove. Like Curtis Mayfield or War, they show that gentle, creative soul can pack a powerful punch. Music for our time and place.