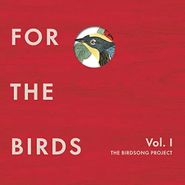 $399.98
Buy Artist: Various Artists
Genre: Rock
Release Date: 12/09/2022
Label: Downtown Records
Catalog Number: 1
Recording: Studio
Length:
Format: Vinyl LP
Note: Downtown Records present, The Bird Song Project "For The Birds: The Birdsong Project". An art-filled, 20LP box set including over 200 tracks of original music and bird-related poetry. Proceeds from the sale of this collection and supporting events will be dedicated to the protection of birds and the habitats they need, today, tomorrow, and for all our futures. Specifically it will go to the National Audubon Society.

The Birdsong Project is a community dedicated to the protection of bird life, and to the celebration of the joy and mysteries of birdsong. We believe that birds - no matter feather or flock - are precious and inspiring and fundamental to our world. That a world without birds would be a world without freedom and flight and song. We believe birds matter, are endangered and need our help.

The Birdsong Project was produced by Randall Poster, the Grammy Award-winning producer and music supervisor known for his longtime work with Wes Anderson and Martin Scorsese, plus star-studded contemporary tribute albums to Buddy Holly, Fleetwood Mac and others. Poster was inspired to celebrate birdsong from his friend and album Executive Producer Rebecca Reagan, who brought a grand creative vision and wisdom to the project. The first Volume of the 5-Volume collection is now available to stream on all platforms. Volumes 2-5 will be released monthly, concluding with Volume 5 being released in September. This collection will also be released as a limited edition 20-LP deluxe box set, which includes a 60-page book featuring an essay by musician-ornithologist Jonathan Meiburg of Shearwater and a package bursting with paintings and illustrations of birds by well-known artists.