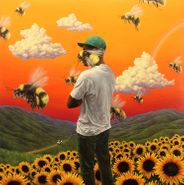 No one will be surprised that Tyler, the Creator’s Flower Boy courts controversy. The teen rapper who made a name for himself with cartoonishly violent murder fantasies and heavily misogynistic/homophobic narratives is as big and bold as ever. But what’s this? Is Tyler being serious when he declares “I been kissing white boys since 2004”? He delves into the topic multiple times on the album; he talks about thinking certain feelings were just a phase to bragging about the hotness factor of the dudes in his ride. This immaculately produced, beat-heavy, lyrically brilliant album sure doesn’t seem to be pulling any punches when Tyler repeatedly raps about his constant state of loneliness and boredom, so why doubt him? Perhaps we should just sit back, enjoy this amazing album, and listen to the man himself talk. “I’m the loneliest man alive/But I keep on dancing to throw them off,” he says at one point. In the end, what really matters about Flower Boy is how across-the-board awesome it is and how Tyler speaks his mind without any apologies. He’s as formidable as ever.