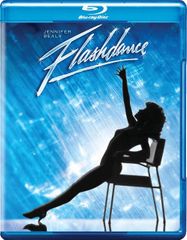 The girls who dance with Alex at the club all have some kind of new wave performance art aspect to what they do and the set pieces are hilariously elaborate. One girl goes for a zany kabuki new wave effect and, well, it’s just weird. For a movie about a dancer in the sticks hoping to make it big we don’t get much of a sense of dance as an art form revolving around the body. The dancing is really about the editing which is best described as epileptic while the film’s narrative goes forward at such a robotic, lockstep pace – with plenty of music video-like detours comparable to commercial breaks – that it’s not so much a movie that you see as one that you have done to you. In that sense, you might say it’s ahead of its time because the film provided a basic blueprint for the way Hollywood movies are made now. The characters’ emotions are signaled with delicious Giorgio Moroder-produced instrumentals and the clichés of the basic kid with a dream story who must “risk everything” are cheerfully, mindlessly, and ferociously utilized.

The music, the dancing, the romance, the leg warmers...oh, what a feeling! Get ready to re-experience all the drama as Alex (Jennifer Beals) bravely fights her way out of the welding gear, off the stripper pole and onto the dance-school floor.

Flashdance, the pop-culture phenomenon of the '80s is back and flashier than ever with brand-new featurettes exploring the history, the look, the music and much more! Academy Award®-winner for Best Song, "Flashdance - What A Feeling," it's the hit film that inspired a generation.