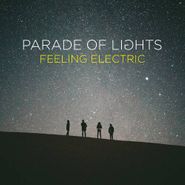 In February 2014 the infectious sound of an arena worthy melody embedded itself deep into the ears of millions of pumped up viewers, ready for the impossible to become reality. NBC’s coverage of Sochi Winter Olympics, as well as ESPN’s promos for Super Bowl XLVIII, rang out with the soaring anthem "Golden." Parade of Lights, the LA-based electro pop outfit that brought you that single, is back to debut their first full-length, Feeling Electric. The album features the four previously released tracks that were on the Golden EP, along with several other fresh cuts. The most apparent being the titular track, "Feeling Electric," which rivals the catchiness and attitude of "Golden" in every way. Other strong contenders for killer anthems are "Can’t Have You," "Wake Up" and "We’re The Kids."