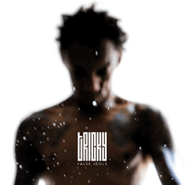 It starts boldly — over spare keyboards that sparkle and menace, Tricky’s vocalist invokes the great Patti Smith, singing, “Jesus died for somebody’s sins but not mine.” He repeates the trick on “Valentine,” borrowing a line from Frank Sinatra to unleash more digital menace. It almost speaks to Tricky’s desire to connect after years of somewhat falling from public favor after his breakthrough 1995 album, Maxinquaye — False Idols is his most enjoyable album in years, maintaining the dark energy of his early work but with renewed vibrancy. “Parenthesis” lurches and heaves with a hooky guitar line, high-end vocals and empty space, referencing the classic trip-hop sound. But it’s not all nostalgia; “Bonnie & Clyde” features a shuffling beat and a sexy back-and-forth between his female vocalist (the album features British singers Francesca Belmonte and Fifi Rong) and Tricky’s own growling whisper, keeping in line with the sound he helped pioneer while moving past nostalgia into something that feels current. The sun may have set on trip-hop’s initial run, but as Tricky sings on the luxurious “Nothing’s Changed,” “I was born to give,” and give he does on the great False Idols.