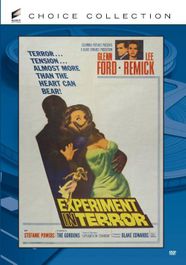 This product was manufactured on demand using a DVD-R recordable media disc and should play in most standard U.S. DVD players and DVD-ROM drives made after 2001.

Glenn Ford plays the dedicated F.B.I. agent, John Ripley, who fights to protect Kelly Sherwood (Lee Remick) from a ruthless killer. Unless his plans to rob the bank succeed, the unseen assailant (Ross Martin)-identifiable only by his asthmatic breathing-threatens to murder Kelly and her teenage sister, Toby (Stefanie Powers). To save the two terrorized sisters, the F.B.I. sets up an elaborate trap using Kelly as a decoy, but the killer gets away. Nerve-racking suspense builds as Kelly, now panic-stricken, continues to act as bait long enough to let the Feds trap the killer. Unless they act quickly, the woman in distress will become the casualty of a deadly Experiment In Terror!