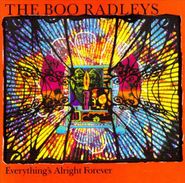 Everything's Alright Forever was released in August of 1992. This was the second album from this English band. The Boo Radleys had released Ichabod & I in 1990. This was also one of those bands that I only listened to one album by. I never ventured beyond Everything's Alright Forever. The album featured "Skyscaper." Another song that I can never get enough of. Like "Sunshine Smile" by Adorable or "Higher Than The Sun" by Primal Scream. It is just one of those early 90s songs that I can listen to over and over again. The Boo Radleys went on to put out 4 more albums after this one in the mid to late 90s. This is another classic album of the shoegaze era. Giant Steps was release the following year and everyone seemed to love that album too. But this is honestly the only album I ever owned by them. But it is still one of my favorites of the year.