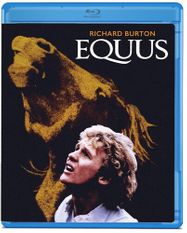 Equus, Peter Shaffer’s Tony Award®-winning play (which he adapted for the film) is brought to life on the screen by director Sidney Lumet (Dog Day Afternoon) and a cast that includes Richard Burton (Alexander the Great) and Peter Firth (Joseph Andrews) as psychiatrist and patient in a disturbing tale of a mysterious and unfathomable crime. Joan Plowright (101 Dalmatians), Colin Blakely (The Private Life of Sherlock Holmes), Jenny Agutter (Logan’s Run), Eileen Atkins (TV’s The Crown) and Harry Andrews (Alexander the Great) turn in bravura supporting performances in a film photographed by Oswald Morris (Fiddler on the Roof) with a score by Richard Rodney Bennett (Murder on the Orient Express). FEATURES: