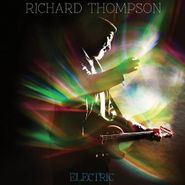 Folk legend Richard Thompson, who’s had a solid run of 20 previous solo albums, plus albums with Fairport Convention and his ex-wife, Linda Thompson, returns with an album that isn’t so much anti-folk as it is folk amplified beyond even what its cheeky title would suggest. Thompson builds a thorny pub-rock jam in “Stony Ground,” about a guy who goes “pokin’ his nose where it don’t belong” — around some dangerous woman — and gets what’s coming to him. Thompson sounds as turned on as he is turned up on the bluesy stomp of “Sally B,” with Thompson’s baritone voice matching the passion of his wicked guitar licks. “Others make a living, but me I just survive” he sings on “Stuck on the Treadmill,” the riffs of which venture into prog territory. Thompson’s singing in character, but you could read it as a tongue-in-cheek line about a career as an underappreciated musician. One thing’s for certain: Plugged in and pissed off suits Richard Thompson just fine.