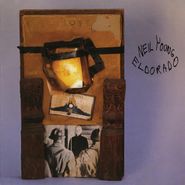 At last, Neil Young & The Restless’ 1989 mini-album Eldorado is being released in the US. Originally released in Japan and Australia, the five-track album features four Young originals, plus a cover of the Mann/Weil/Leiber/Stoller standard “On Broadway.” Although Eldorado will be a massive score for completists, it’s also an album everyone should hear. The tracks are steeped in Young’s blistering intensity, incisive lyricism, and irresistible guitar work. Right now Eldorado feels like a recently unearthed buried treasure; before long, it’ll feel like one of Young’s essential, classic albums. It’s that good.