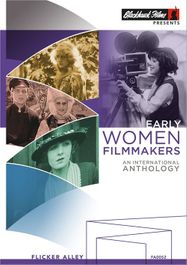 More women worked in film during its first two decades than at any time since. Unfortunately, many early women filmmakers have been largely written out of film history, their contributions undervalued. This necessary and timely collection highlights the work of 14 of early cinema's most innovative and influential women directors, re-writing and celebrating their rightful place in film history.

These women were technically and stylistically innovative, pushing the boundaries of narrative, aesthetics, and genre. Going back to the beginning of cinema, this collection makes visible the tremendous directorial contributions women made all around the world. Beautifully restored in high definition, Early Women Filmmakers features new scores by Sergei Dreznin, Frederick Hodges, Tamar Muskal, Judith Rosenberg, and Rodney Sauer and the Mont Alto Motion Picture Orchestra.

This anthology is dedicated to the memory of David Shepard (1940-2017), without whom these films along with countless others would simply not have been made available in such beautifully-restored editions. The collection represents one of David's final produced works, completed in collaboration with several film archives, including the French National Center for Cinematography and the Moving Image (CNC), the Film Studies Center at the University of Chicago, and the Library of Congress.