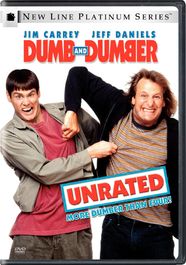 Lloyd and Harry: One’s dumb, the other’s dumber. You pick which is which. Jim Carrey (Lloyd) and Jeff Daniels (Harry) deliver a delirious no-brainer as they hit the road to return a misplaced briefcase to its owner (Lauren Holly). The fellas don’t know the case is crammed with ransom money. Maybe that’s why smash-mouth lowlifes are trailing them, you think? Best to leave the thinking aside as the boys and the filmmaking brothers Farrelly (There’s Something About Mary) invent something really dumb…and really, really funny.