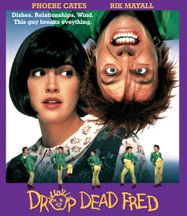 Black comedy/fantasy stars Phoebe Cates as Elizabeth Cronin, an inhibited Minneapolitan who's having the bad day of all bad days. At the depth of despair, Elizabeth calls on imaginary childhood friend Drop Dead Fred (Rik Mayall), whom she's had locked away in a jack-in-the-box for decades, to steer her through such dire emotional straits as an overbearing mother (Marsha Mason), an estranged husband (Tim Matheson), and the loss of her job. Co-stars Bridget Fonda, Carrie Fisher. 99 min. Widescreen; Soundtrack: English; Subtitles: English (SDH); audio commentary; featurettes; deleted scenes; theatrical trailer.