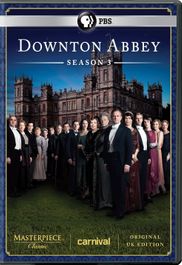 The war is over, but intrigue, crisis, romance, and change still grip the beloved estate in the thrilling new season of Downton Abbey. Written and created by Julian Fellowes, with its all-star returning cast and Oscar-winning guest star Shirley MacLaine, Downton Abbey, Season 3 premieres January 6, 2013 on Masterpiece classic! Until then, explore all things Downton, from war to peace to everything in between.