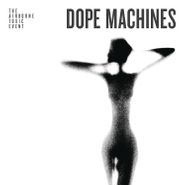 The Airborne Toxic Event emerged in the late ‘00s as young successors to the Arcade Fire’s symphonic indie-rock. Since then, they’ve grown and grown, looking to U2 as models for the arena-ruling anthemic rock band while opening up a bit lyrically. Their fourth album, Dope Machines, is their loosest and most fun set of songs to date. The booming synths and impassioned vocals of “Wrong” give the band an emotional opening statement, while its follow-up tracks seem to detail the other side of fame. Wearily melodic new waver “One Time Thing” sees frontman Mikel Jolett singing about “moonshine and cheap ass wine” like it’s the last thing he’d like to remember. The scenic atmospherics of “California” give way to lyrics about an empty hookup—“I was just a name and a number/A face on a tumblr,” he laments. Despite Dope Machines’ easy nu-wave settings, they can still pull off a tearjerker like “The Thing About Dreams,” an ode to life and success never measuring up to how you imagined, as Jolett sings “the thing about love, it’s never enough” over his third whiskey rye. With Dope Machines, Airborne Toxic Event prove they can evolve musically into the kind of stratospheric rock band they were always meant to be while still tapping into the confessional lyricism and indie-rock touches on which they made their name.