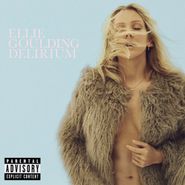 Much like Taylor Swift did with 1989, Ellie Goulding is an artist who has released several pop albums already but is now dubbing Delirium her “big pop album.” Though this entails working with mega-producer Max Martin, ironically, she’s dialed down some of the EDM flavor of her previous work in favor of making her songs more distinctive in general. On first single “On My Mind,” we hear Goulding’s feathery voice and attitude more distinctively than ever, while the song’s hip hop beat is a welcome addition to her arsenal. “Something in the Way You Move” is a slinky, Jacksonesque little number that should fare well in with kids currently blasting The Weeknd’s “I Can’t Feel My Face.” Not all of her gambits work—“Lost and Found’s” beat is strong, but it’s a little cutesy. But even at a long 16 tracks—more if you pick up the deluxe edition, which includes eight more songs such as a memorable electro power ballad with Calvin Harris called “Outside”—Delirium is undeniably solid throughout, as Goulding exudes confidence in every setting she’s in, showing new force behind her amiable voice.