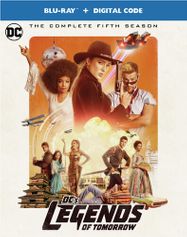 Set in the same universe as "Arrow" and "The Flash," this thrilling DC Comics-inspired series debuted in 2016. Time-traveler Rip Hunter (Arthur Darvill) must assemble a group of heroes and villains in an effort to prevent a future where the Earth is conquered by an evil despot. The team includes shrinking crimefighter the Atom (Brandon Routh), reincarnated warriors Hawkman (Falk Hentschel) and Hawkgirl (Ciara Renée), the icy Captain Cold (Wentworth Miller), and Martin Stein (Victor Garber) and Jefferson Jackson (Franz Drameh), who join together to become the heroic Firestorm.15 episodes on 4 discs. 10 1/2 hrs. Widescreen; Soundtrack: English.