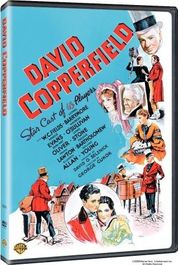 "We are friends for life." The man speaking: Micawber, played by W.C. Fields with great comedic charm and human warmth. The child addressed: David, played by Freddie Bartholomew in his Hollywood debut. The movie: David Copperfield, still one of the best ever screen adaptations of a Charles Dickens novel. "To call the casting inspired is to underrate it," historian David Shipman wrote in his The Story of Cinema. Lionel Barrymore, Edna May Oliver, Maureen O'Sullivan, Basil Rathbone and more join Fields and Bartholomew in portraying the eccentrics, cads and loving family of this film directed by George Cukor. David O. Selznick produced, insisting on an attention to Dickensian detail that included matching the sets to the first edition's illustrations. The result: one of the greatest page-to-screen adaptations ever.