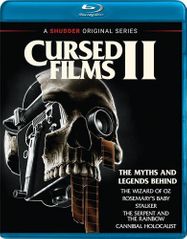 There are certain horror movies for which the unholy scenarios that play out on-screen are matched by the unnerving legends spawned by fateful production accidents or subsequent misfortunes that befell cast and crew. Every season of this Shudder documentary series looks at five such films and features the perspectives of creators and fans concerning the eerie mythology that each has spawned. Episodes include "The Wizard of Oz," "Rosemary's Baby," "Stalker," "The Serpent and the Rainbow," and "Cannibal Holocaust. " 138 min. Widescreen; Soundtrack: English.