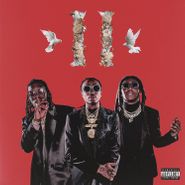 Blame it on sequels. In every way the bigger, faster, and stronger update over its predecessor, Culture II is nearly double its length too. With one hour and 45 minutes of music spread over a modest 24 tracks, and featuring a litany of star-studded features, Migos’s newest album is an absolutely massive release in the vein of overstuffed '90s rap blockbusters such as Life After Death or All Eyez On Me. Fortunately, out of any group working in hip-hop today, Migos come well-equipped to handle the spotlight. While initial single “MotorSport” brought promises of dutiful “Bad and Boujee” imitation, thankfully elsewhere on Culture II the trio are not afraid to let their hair down. “Narcos” melds Latin American-guitar samples to a vicious trap beat and features some absolutely bonkers ad libs alongside a scene stealing Offset verse. “Supastars” is hip-hop gone '70s prog, with spacey synths draped across its thumping 808 bounce. And then there’s “Stir-Fry,” arguably the album’s greatest moment. Over an incredibly dense Pharrell beat, one that somewhat resembles an attempt to combine all his best known productions into a single song, Migos are up to the challenge, somehow fitting tongue-twisting verses and effortless hooks into the madness. The result is a breathless, joyous burst of kinetic energy that marks a true evolution for Migos’s sound. “Stir-Fry” is destined to become a dance floor banger for years to come and elevates Culture II to instant classic status, hyperbole be damned.