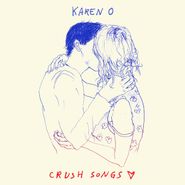 Karen O's debut solo album is a sweet little collection of lovelorn lo-fi acoustic ditties. If you’re familiar with her soundtrack work (Where the Wild Things Are, Her) and the less bombastic tunes on Yeah Yeah Yeahs albums, you sort of know what to expect here—songs whose simple acoustic strums seem to emit light, while Karen Orzolek's voice pairs childlike wonder with adult longing. "Love's a fucking bitch ... do I really need another habit like you?" she wonders wearily on the watery "Rapt." Meanwhile, on "Beast," her voice sways in and out of tune over a minor-key strum like someone newly in love and barely able to stay standing. Though the shambolic nature of Crush Songs is intentional and mostly works, a couple of tracks seem unfinished or are too short to make an impact, such as the incongruously titled whisper of a song, "NYC Baby." But it's nice to get swept up in Crush Songs as a whole, as these snippets kind of whirl together to form something cohesive and magical. And some of the tunes here, like the adorable "Body," are among her best. Listening to Crush Songs feels like Karen Orzolek is letting you in on a secret between just you and her, and that kind of special feeling it garners is something rare indeed.