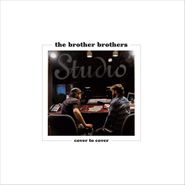 Adam and David Moss, the folk-singing twins known as The Brother Brothers, pay tribute to those who influenced them on their latest album, Cover to Cover. With smooth, crooning voices that will surely evoke memories of Phil and Don Everly, the duo pay respect to luminaries such as Richard Thompson, James Taylor, Tom Waits, and more.