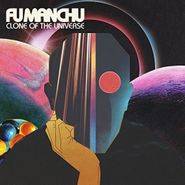 The prolific and ever-reliable Fu Manchu return with another blistering tour de force, Clone of the Universe. Longtime fans know what to expect: heavy riffs, menacing bass lines, and oddly infectious choruses, which the band delivers in spades. The title track is a cosmic journey into the druggiest reaches of space. "I've Been Hexed" is an instant earworm, guaranteed to shake the walls of your skull long after the needle has been lifted from the record. Then there's the "Il Mostro Atomico," a searing eighteen-minute-long epic featuring legendary Rush guitarist Alex Lifeson. A thoroughly satisfying, punishingly intense listen from these longtime masters of stoner rock.