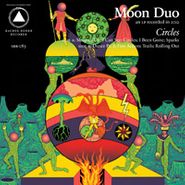 Zoom off on a kozmic desert trip with Moon Duo! Circles, the third album from this side project of the great Wooden Shjips' guitartst Eric Ripley Johnson, is a garage/kraut/bubblegum blast, full of crunchy riffs, whipcrack motorik rhythms and zoney space howlin'. Not to mention the Shjipsy predilection for endless Suicide-al rep rep repetition. Hot shizzzzz!!!

Echoes of Suicide, Silver Apples and Spacemen 3 emulate from Moon Duo’s big bad amplifiers, but the San Francisco band develops that into their own brand of psychedelia on Circles, their latest and finest release. The band, which consists of SF psych-rockers Wooden Shjips’ Erik “Ripley” Johnson on guitar as well as Sanae Yamada on keyboards, sounded great on previous releases when they let things fly into extended jam territory (as do Wooden Shjips), but they sound just as engaging in more bite-sized pieces, as on the darkly melodic “I Can See” and jangly title track, which lets just enough light in to help illuminate the rest of the album as a result. They still do motorized rock with Kraut beats like no other, as on songs like “I Been Gone,” but songs like the actually kind of dancey “Dance pt. 3” prove to be the perfect augment to their sound. Badass and no-nonsense, for sure, Circles captures Moon Duo at their best but allows them loosen up stylistically and have a little more fun at the same time.