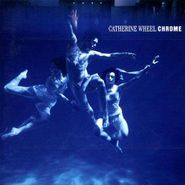 Catherine Wheel released Ferment in 1992. This album featured "Black Metallic." One of the best songs of the 90s. But it was their second album that I really got obsessed with. I listened to Chrome probably hundreds of times. Chrome featured "Crank," "Fripp," "Pain," "Show Me Mary" & "The Nude." I can listen to "Fripp" over and over again. Catherine Wheel were yet another band from England for me to become obsessed with. They shared much in common with many of the shoegaze bands of the era. But they were a bit harder and shared much in common with some of the grunge bands of the era. They were like Shoegaze Grunge. Somewhere between The Smashing Pumpkins, Tool, Soundgarden, Lush, Slowdive & Ride. I listened to an album every night before I went to sleep throughout much of the 90s. This album was one of those albums in rotation. The album still holds up after all these years. It was the bands best album without a doubt. They went on to release three more albums after this. But they could never capture what they had done with Chrome. Another one of my favorite album covers of the decade. Very similar to the cover for Nevermind.