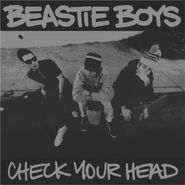 The Beastie Boys’ multiplatinum 1992 album Check Your Head is noted for being less sample-heavy and bringing back live instruments, with Mike D on drums, Ad-Rock on guitar, and the late MCA on bass. Also significant for featuring Money Mark’s first appearance on keyboard with the group, the album reincorporated the Beastie Boys’ early punk influences into their sound and heightened their popularity in the ‘90s alternative scene. This year, Check Your Head celebrates its 30th anniversary with a grand slam of a reissue: A limited edition 4LP box set that includes the 2009 double LP remaster and two discs of B-sides, live tracks, and remixes. Time to dig in and enjoy!