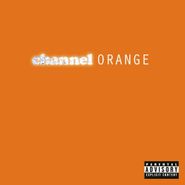 Outside the hype, this guy is the genuine deal. Orange is a cohesive old-school album with vivid modern snapshots of moving to the city and the characters he met there. There's not a bad or so-so track among the bunch here and not a "banger" in sight! One foot in the modern R&B canon and one foot in the future Ocean himself is the designer of. The Orange Print? Maybe. I feel Orange every time.

Frank Ocean’s music touches such a raw nerve because it’s the rare album that fully appeals on a here-and-now pop level while referencing classic pop — in this case, pop and soul maestros like Stevie Wonder and Elton John — and offering something else entirely. This something else is that human, overexposed, heart-and-mind-on-sleeve content that firmly roots Channel Orange in the social network era. First hit “Thinkin Bout You” boasts obvious craft, the kind of instantly memorable song that combines a suave, easy to follow melody and arrangement with dagger-in-the-heart lyrics, but it also instantly communicates that sort of indescribable nostalgic feeling of stupid unrequited crushes, moments of indirection, and fleeting feelings of serenity in youth. Beyond that opening instant classic, Channel Orange brims with power. Take the lush Marvin Gaye-meets-How to Dress Well-meets-Kanye West depiction of new parenthood in “Sierra Leone,” its lyrics offering a welcome balance of vagueness and detail devoid of judgment, communicating feelings of joy and trepidation. He celebrates and also exposes the lives of privileged black youth in a seemingly realistic way, beyond the bling-style fantasies of much of hip-hop, in songs like “Sweet Life” and the brilliant “Super Rich Kids,” which sounds like a hip-hop “Benny and the Jets” playing over an episode of the similarly revelatory reality show “Baldwin Hills.” He creates a sprawling, Kanye-style centerpiece with “Pyramids,” an epic track buoyed by raunchy synth riffs that turn glittering in the song’s sweetly disintegrating second half. And he continues to explore his evolving sexuality on a trio of closing ballads, in which he sounds as comfortable and natural singing about love between men, and between men and women. Though that doesn’t at all overshadow the rest of the album, which has more merits in spades to stand on its own, it can’t be ignored, either, as a huge moment for hip-hop — for all music — as a knocking down of barriers in music, sexuality and male image through some of the most dazzling, yet thoughtful pop music being made today.