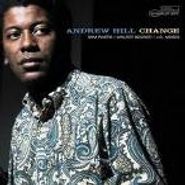 This 1966 session under Andrew Hill’s leadership is arguably the pianist’s most “free” date, though it still uses traditional forms to launch its experiments from. Surrounding himself with a trio of like-minded musicians all renowned for their listening skills, Hill and Sam Rivers (tenor sax), bassist Walter Booker and drummer J.C. Moses created a tableau of human emotions (evidenced in song titles like “Pain,” “Hope,” and “Lust”) that certainly reflected the turbulent times in America. With Hill switching between piano and the unlikely jazz choice of harpsichord, Rivers opens “Violence” with a blistering, free-form solo remarkably logical given the lack of familiar rhythmic and melodic footholds. Hill follows with an equally compelling solo on piano, followed by a harpsichord/bass trade-off that begs credulity given the keyboard instrument’s historical baggage. Rivers sits out “Pain,” a whimsical trio piece that swings a bit like a Thelonius Monk tune. Booker’s syncopated bass line and Moses’ polyrhythm gives a Latin feel to “Illusion” as Hill and Rivers float melodies past each other to play off. “Hope” begins in a wistful, ballad-like manner, but the tempo doubles after the first 90 seconds as Rivers races into a scorching solo with Hill adding angular block chords behind him to Booker’s walking bass line. The other trio number’s title is a bit misleading, since “Lust” is as close to a tender ballad as the band gets here. “Desire,” which ended the original LP (two alternate tracks have been added to the CD), may be the most structured piece with its exotic blues feel (oddly reminiscent of Bobby Timmons’ “Moanin’”). Moses and Booker, who plays a straight bass figure through most of the piece, roll out a jaunty 5/4 rhythm as Rivers sandwiches two fairly conventional but nevertheless compelling solos around Hill’s. With a foot in both worlds, Change captures the transition from the past to the future quite well, and is a good introduction to “free” jazz for those willing to branch out but not quite ready to go all the way.