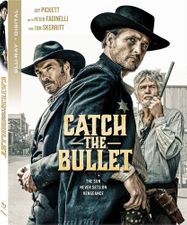 When marshal Britt MacMasters (Jay Pickett) discovered that vengeful outlaw Jed Blake (Gattlin Griffith) had kidnapped his young son Chad (Mason McNulty), he rode off through Sioux territory in pursuit with Indian guide Chaska (Cody Jones) and bigoted deputy Tucker (Calder Griffith). Beyond the threat of ambush, the lawman would find peril within his own search party-while Blake would discover his resourceful hostage was anything but harmless. Peter Facinelli also stars. Widescreen; Soundtrack: English.