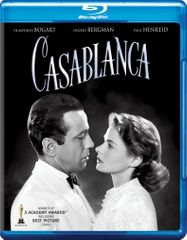 The legendary film “Casablanca” -- which critic Leonard Maltin calls “the best Hollywood movie of all time,” starring Humphrey Bogart and Ingrid Bergman and winner of three Academy Awards including Best Picture (1944) – will celebrate its anniversary with a stunning new “Casablanca 70th Anniversary 3-Disc Blu-ray + DVD Combo Edition” on March 27 from Warner Home Video. This new limited and numbered gift set edition, perfect for Mother’s Day gift giving, will introduce two never-before-seen documentaries – “Casablanca: An Unlikely Classic,” and “Michael Curtiz: The Greatest Director You Never Heard Of.” The new documentaries will complete the most extensive collection of content in one gift set -- more than 14 hours of bonus material that also includes a compilation of three comprehensive feature length documentaries: “The Brothers Warner,” “You Must Remember This: The Warner Bros. Story” and “Jack L. Warner: The Last Mogul.” The “Casablanca 70th Anniversary 3-Disc Blu-ray + DVD Combo Edition” looks like another beginning of a beautiful friendship as well -- elegantly packaged in a double-wide giftbox, with brand-new collectibles created for this release including a 60-page production art book with never-before-seen photos, personal memos and archival documents about the production. A reproduction of the original 1942 film poster and a set of four collectible drink coasters from “Rick’s Café Americain” in a special keepsake box. “Casablanca 70th Anniversary 3-Disc Blu ray + DVD Combo Edition” will be available for $64.99 SRP. Order due date is February 21. “Casablanca” will also be honored with a February 3rd screening at the beautiful new state-of-the-art Warner Bros. Theater in the Smithsonian’s National Museum of American History in Washington, D.C. moderated by “Time” magazine critic and film historian Richard Schickel, with special guest Stephen Humphrey Bogart (son of Bogart and Lauren Bacall). “Casablanca” will be the premiere event in a weekend-long tribute of three other Bogie classics, following the gala opening of the theater, made possible by a grant from Warner Bros. to the Smithsonian. There will be an accompanying display highlighting costumes and artifacts related to these classic films and the history of Warner Bros. Special Features for Hours of Entertainment